It is the year of the Pig! Xin Nian Kuai Le. 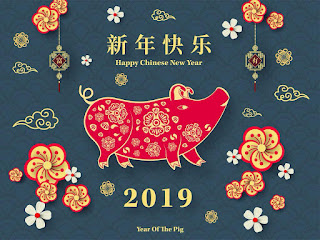 I am back to blogging because I am on Facebook and Instagram hiatus. I find I like it better here because it is more "quiet". Blogging is one way communication. If you don't go blog-hopping therefore you do not collect shit along the way too.

Have a great Chinese New Year!
Posted by Joan at 8:16 AM No comments:

My story of a miscarriage and the D&C

It took me a week after the whole thing ended, the dust settled, to actually sit down and pen down my thoughts on the recent experience that I had. I am very grateful for everything to know that I am in good health after the procedure.

I knew I got pregnant when I missed my period in early November. Took the pregnancy test twice and it came back positive as well. But November also is a very busy month for all teachers who are in constant chaos and race against time to put things together before the school.

Went to see the ObGyn in mid Nov, but it was still to early to detect anything via ultrasound. Came back in early December and get to see the sac and probably a flutter of heartbeat at 6 weeks. But nothing much, everything is still too early. That was on a Friday during the first week of December. Went on with my invigilation work as well as weekly Zumba classes throughout November and December. No major nausea, just a little bit too much of sleepiness. Everything seems to be just like my first pregnancy experience.

And then my body don't feel that good on 8th Dec, after my Zumba class that morning. Took it as nothing and just slept earlier than usual. But there were cramps and it felt like I will be having my period kinda feeling. But I brushed it off thinking that it must be the uterus expanding bla bla bla. Then I started bleeding on Sunday onwards. Went to see the Obgyn again, this time with a vaginal scan and he said that it is very quiet inside there. My heart sank already. Bleeding + no heartbeat. I guess I have to be ready for worst case scenario already. Cried while waiting for the meds at the pharmacy (doc prescribed me with Duphaston), cried while driving home, cried during lunch, cried when I whatsapp my mom.

Slept the whole day after the appointment with doctor, contemplating whether I should take the meds or not. I hate taking hormone pills because it disrupts everything. But the doctor said its for saving the baby and will stop the bleeding. But then I bleed some more that day. Hmmm. Putus asa sudah. I basically bleed out the whole week until the next appointment with the doctor again.

So, throughout the whole week, I already accepted the fact that there will be no heartbeat and growth. If there is then it is a miracle.True enough, there were no changes since the last visit. In fact, an enlarged yolk sac was detected and the doctor told us that the baby might not be healthy hence this situation like this. The ObGyn seems very sympathetic and we on the other hand seems to be okay with the whole thing. Sad, yes but we accepted it. I don't feel like dwelling on the sadness too long. Somehow, now I question myself "Did I grieve enough?"

A D&C was scheduled two days after the final appointment. I was initially scared about the whole procedure. Googling about it will only make one more anxious. I actually wanted the sac to just come out by itself so that I don't have to undergo the procedure. But waiting for it is actually not an option since the following week I have to travel back to my hometown. How la if during the travelling time suddenly I bleed out so much. bla bla. So, okay la go on with the procedure saja lah.

That's me trying to be all zen about it. 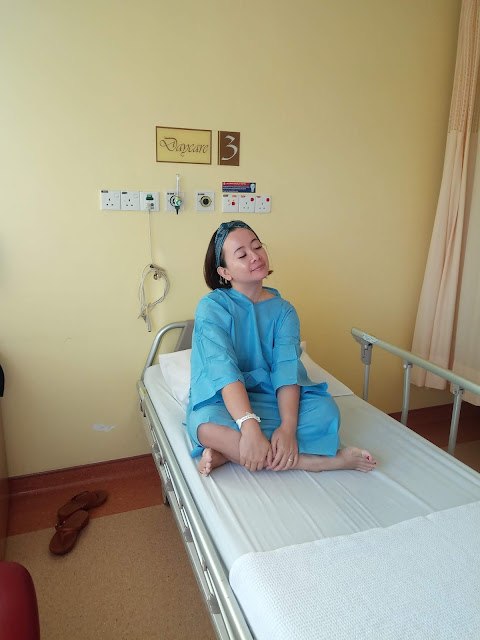 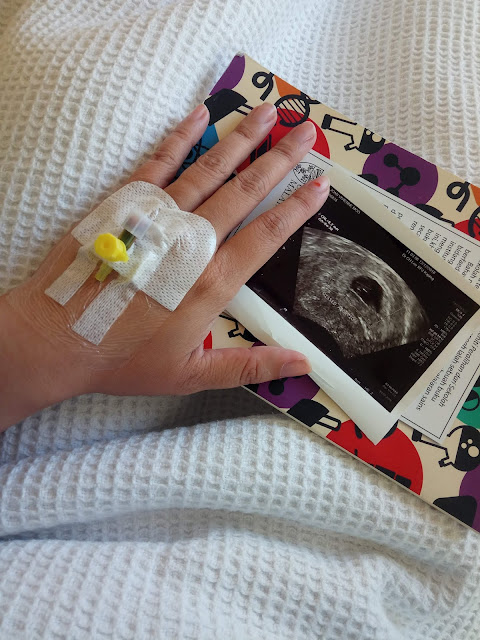 I was actually so damn nervous about the whole thing that I didn't sleep well the night before. I think too much la maybe. Yet, it still doesn't beat my anxiety before my scheduled c-section last time.

So, here's the rundown on what happen on that D&C day:

0830 - warded at daycare and they put in the medicine to soften the servix
0900 - the anesthetist came over to say hi and brief me about the GA. Somemore, I asked how long I will be out. He said it will be only for 30 mins. "oooh, saja saya bilang - padahal takut sudah"

While waiting for the "ripening" of the servix, I was advised to just stay in bed and only walk to the toilet if I really need to pee. The nurse said don't move to much or else you might bleed a lot. Oh well. Just lie down lah. The mister was there with me, thank you la kasi kawan and he actually have to work there also. Hmmm, classic. It is almost like a dejavu feeling when I gave birth last year. Me on the hospital bed and the mister on the sofa with his laptop - working. 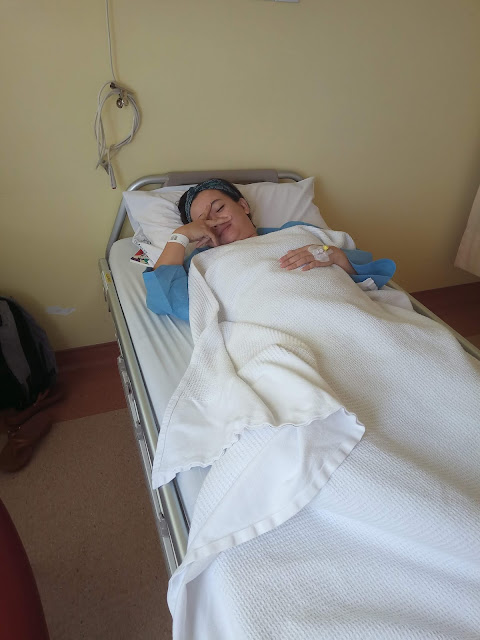 1100 - wheeled to the waiting area before the OT, and I lie down there alone saying my prayers for 10 - 15 minutes. I just don't know why suddenly the anxiety went on a surge that time. Felt like running away from the OT saja.

1130 - wheeled into the OT. Bright lights and such. Hmmmmm. Dejavu again. The anesthetist and nurses greeted me and gave me the final briefing before a breathing mask is being put over my nose and mouth.

I struggled initially; just shallow breaths. But then I started to get high. One more deep inhalation and suddenly all the sound drifted away and *poof - I was out!

The next thing I heard was someone calling my name asking me to wake up. Sleepy and groggy, I opened my eyes and realize that I am at the recovery area, post operation. WOW, I don't feel anything and now I am here. Siap sudah. That was quick.

No nausea, no vomitting. At 1330, I was served light meals. By 1530, I already walked out of the hospital and went straight to the mall to buy a handbag eventhough I was struggling with my head being foggy and heavy. But the determination to get a handbag over rule that. Hahahaha. Nasib baik my mother doesn't know about me going shopping after my D&C.

People say need to pantang and all but once I got back home, I need to be a mother again. The responsibility resumes. Not so much time dedicated for that.

One week after the D&C, I bleed less. Just minor spotting. But the hormones is in a mess. Just like after giving birth last time. Oh well, it is something that I have just to pull through. I don't dwell in the sadness over the miscarriage but I realize I am very fragile towards negative words and body language. I cry easily too. Susah la bah begini.

- I guess physically I am okay. Mentally, I need some time to find myself back.
Posted by Joan at 2:26 AM No comments:

Dusty dusty blog. Hello.... I can hear the echo here but I need an outlet to organize my thoughts. Microblogging site just can't handle the amount of keystrokes for this incoming rants.

Teaching is still my passion but it is overshadowed with the gloomy burden of the clerical work that we have to do. I STILL can survive those. NEVER MIND. It is all about organizing workloads and prioritizing. One thing I hate the most in my current work place now is the amount of micro managing done by the superiors. Although I love my direct boss, but the majority of the superiors took their roles too seriously to the point of where it is seen as showing off and showing who is the boss. Ah! Enough about those things. It is just like running in a circle.

Tomorrow is a Saturday and I felt that there are tons of backlogged things to do. Looking at my list of things to do, I get overwhelmed. I need to organize my thoughts better. Prioritize! First things first. I need to tell myself to calm down, if not I will find myself drifting into a panic mode. All because 2018 is actually ending and I am still stuck at analyzing and writing out my thesis. Now, it has become a deep wound that doesn't heal. I need to heal it quick and move on. Like seriously.

But also, I lack writing practice. This writer's block is like a permanent thing stuck here. NOT going to move and NOT going to budge. Disrupting the flow. I need to do something about this. I need to dig deeper. Suddenly, I remembered all those "eureka" moments for my writings last time happen late at night when I can't sleep.Now, I am in dire need of sleep because my son still doesn't sleep through the night. It is still better than the newborn phase though. Haha.

Currently I am staying in a landed house. Finally, our own home. No more renting. But its quite far from the big city. Somehow, it is better here especially for raising a family. Grateful for the things and opportunity like this.

Okay, need to stop ranting here. I feel like reading a book now. I need to salvage all this solitary and tranquil moments before I get disrupted with my son's crying or my husband's snore.
Posted by Joan at 11:33 PM No comments:

All this while, I never thought a pep talk can make any difference in anyone's life. Its all like yadda yadda here and there. BUT now, I am in need of one. Everytime I think about thesis and life. I get overwhelmed and I felt like running somewhere where people can't find me.

I need to accept the fact that daily routine are no more all about me. Sustaining a healthy relationship within the family, juggling a career and just living everyday is actually tiring. Everything seems like a ticking time bomb now where the biological clock is ticking, the thesis clock is ticking. Yet, you can't seem to do everything all at the same time.

I need to tell myself this. I can do this. I need to just do it and don't think so much. Every day has its trouble on its own.

ok back to my thesis struggle.
Posted by Joan at 1:33 PM No comments:

I am sitting in Starbucks, drinking my current favourite frappucino. Tea-ramisu. Green tea concoction with cheesecake taste in it. I found myself staring blankly to the space without having any thoughts in my head. Just blank. Empty. 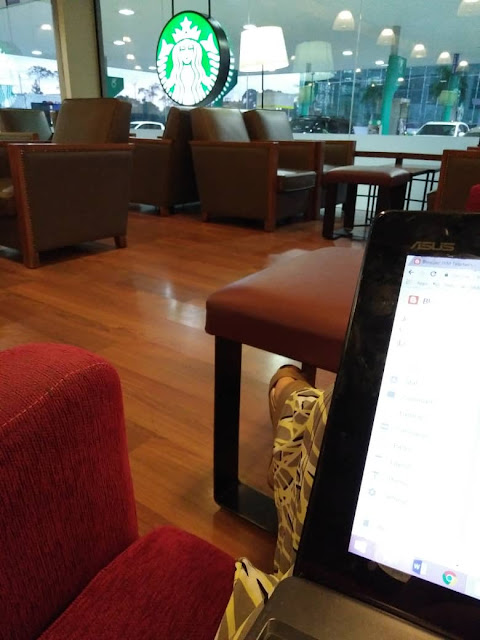 My mind is seriously exhausted I think. Lack of sleep is nothing, I can overcome that. Somehow, these few days, I am just overwhelmed.

It is not easy to be a mother, a working mother, and don't remind me about the thesis that is still hanging there without being done. I need to graduate this year. But I feel 24 hours is not enough. I miss this quite "me" time yet I feel selfish for not driving straight back home after work but just hang around in Starbucks and staring blankly into nothing-ness.

Asking for help is a source of conflict and I end up being bossy ordering people around. But in a day, there's just so many things to do. Also, my working environment is not helping at all - with toxic bosses around and colleagues who don't rebel like me. I felt so alone.

Yes, very much alone. Hence, this dusty blog suddenly comes alive after a long hiatus.
Posted by Joan at 7:17 PM No comments: