You know those cute custom made baby crib bumpers on Instagram? They are adorable but come with a nice price tag as well. Ya, I appreciate custom made things. But I am not paying that much for something that I have solutions for.

Tadaa! My DIY baby crib bumpers. Its just three back cushions bought from Kaison for MYR 12.90 each. Attached some ribbons at the corner (with horrible sewing skills of mine). There you go, a fast and cute baby crib bumpers. Teehee! 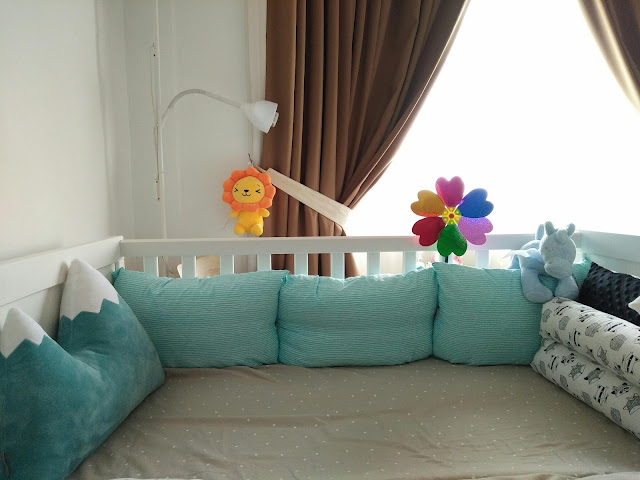 I always love Kaison stuff (hey, this is not a paid blog post okay, just an honest sharing). Look how cute is this mountain shaped cushion in which the husband said is a shark. A SHARK? Which part of it look like a shark? 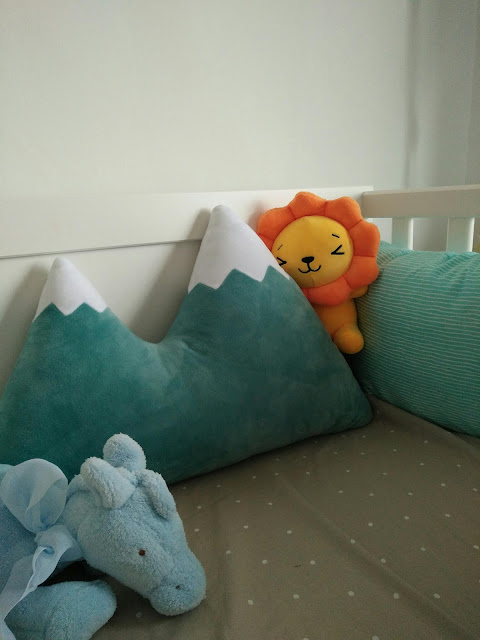 
This living music box sings lullaby for you to sleep,
The milk factory to feed you to make you grow to make you leap,
Mummy is tired but all mothers know this tip,
Every day is a treasure, memories and moments to keep. 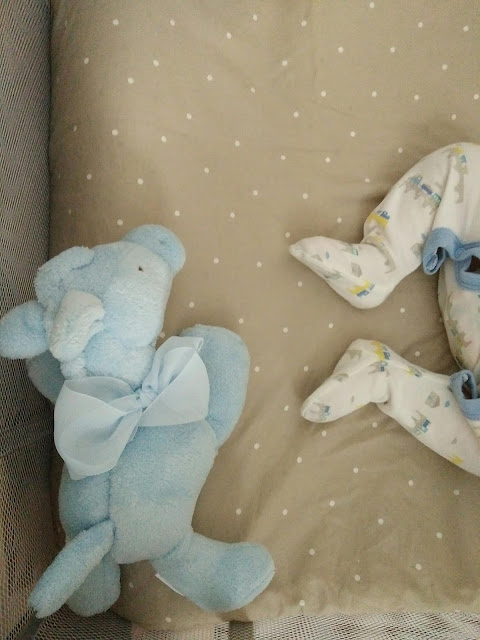 Aaron is sleeping and I am supposed to be transcribing stuff but I am lacking motivation. God, help me! The bed is calling. This mom is not tired, she is just lazy.
Posted by Joan at 11:07 PM No comments:

This is my first time owning and wearing a Mei Tai. Before this I don't have any idea on how to tie one as I am also a beginner with woven wraps. Actually, I did not intend to buy a Mei Tai BUT since this Mei Tai is the only one left in the Attacus Borneon series. I decided to just go for it! In fact it is not even sold at the Bebe Sachi's online shop anymore. It was released in 2016 btw. I just messaged them to try my luck on any of their Borneon series available.

The pattern is something so close to heart (as I am from Borneo ) and I couldn't help to fall in love with the fabric over and over again. Yes, it was love at first sight! Although, I was reluctant to fork out that much money for this Mei Tai but but but I can't resist it. It so meant to be. LOL.

Background: Please welcome the long awaited third sibling in the Bebe Sachi Bornean series, Attacus, named after the magnificent Atlas moth. Yes, you may think it rather absurd, naming a wrap after a moth, because in reality, producing textiles means avoiding moths at all costs! But Attacus Atlas is no ordinary household moth. Once thought to be the largest moth in the world, it is commonly found throughout the Malay Archipelago. Named after the Titan of Greek mythology, or in Cantonese, the name translates to "snake's head moth” as the wing pattern is thought to resemble a snake's head; the Atlas moth is simply stunning. Looking at the hand painted, ikat technique, design of the wrap, you can see the master dyer capture abstracted moth wing flutterings in deep purples and pink, not too dissimilar to Attacus. Our love for Borneo and everything it represents inspired us to produce this series. Rita and Azizah spent many formative childhood years in Sabah and Sarawak and remain closely tied to the area today. The abundance of insects in Borneo is astounding, with many new species being discovered every year. Azizah has fond memories studying insects of all shapes and sizes with scientists from Sabah Universities in areas like the Poring Hotsprings and around Mt Kinabalu. Often a simple lamp left on outside the chalet was enough to attract a huge variety of exciting insects to study. Today, Azizah’s father still ventures out on long scientific expeditions but often reports “there just isn’t as many insects as when you were younger”. We are hopeful that our children will grow up to continue to appreciate nature and maybe , ...even spot the wonderful Attacus Atlas!  - slingofest.com

I am still very much clumsy with this Mei Tai but I love it cos it is much faster to be wrap around compared to a woven wrap. Fast and easy. I took it out for an outing test drive today with Aaron today. Aaron loves this Mei Tai. 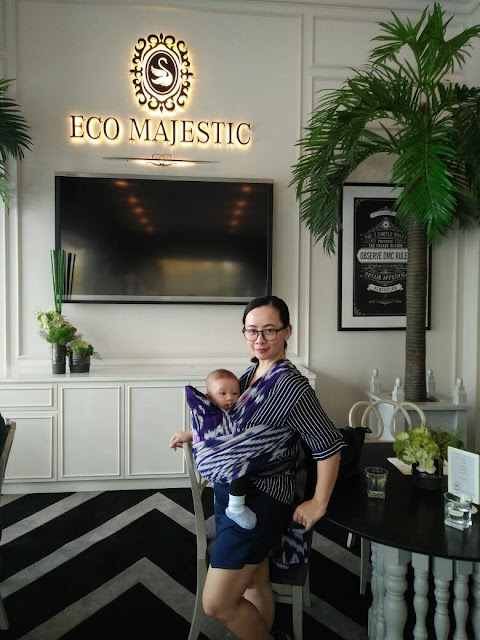 I posted this Mei Tai on my Instagram ( @joan_jade ) and indeed a lot of my other Borneo friends also shared the same view like me. This is indeed a beautiful piece. A friend who doesn't have a baby also said she will actually just wear it for the sake of fashion. Haha.

But my wrapping skills still need some practice as the knot does not hold its position after moving around visiting the show house in Eco Majestic. 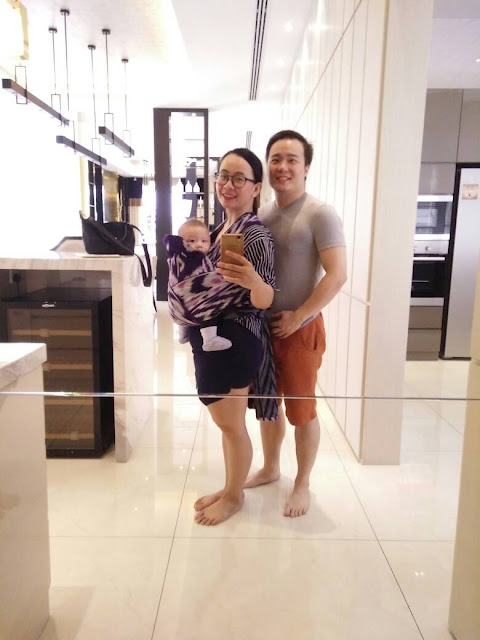 I do hope there will be more ethnic inspired design from Bebe Sachi in the future. Ooh, I did also buy another wrap from them. I will blog about it when I have the time.
Posted by Joan at 7:25 PM No comments:

This is life now 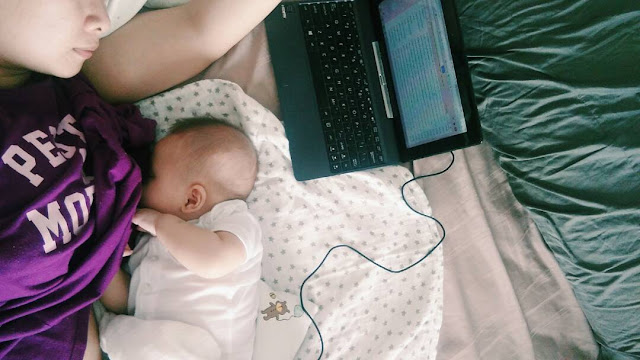 But I won't trade it for anything else.
Posted by Joan at 4:01 PM No comments: 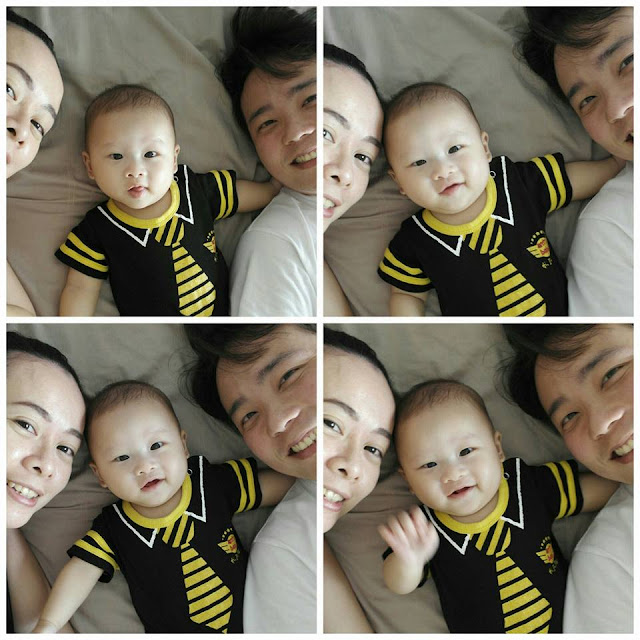 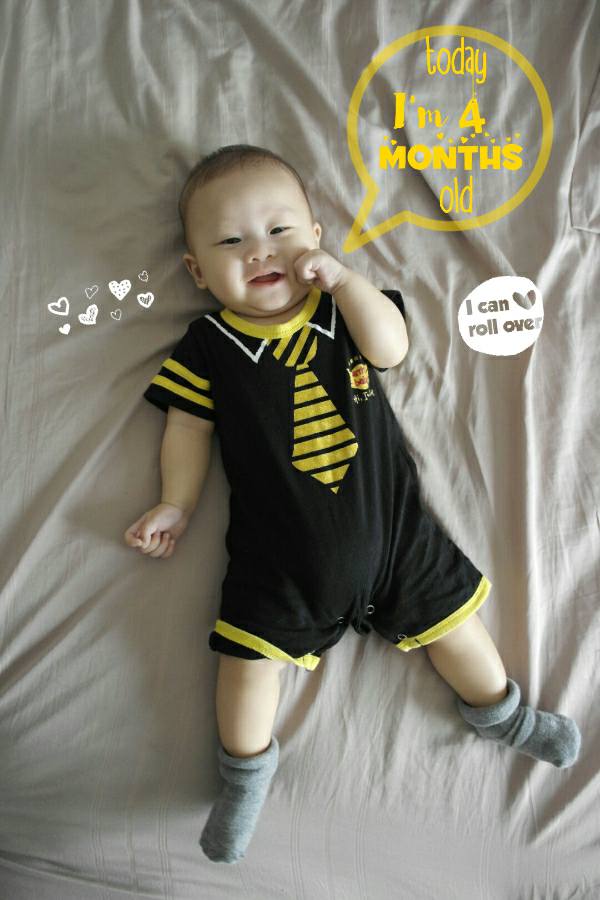 My sunshine is 4 months young today. Time flies! Ah, babies they grow up SO fast. I am so glad that I took this extra leave (although unpaid). Like a friend of mine who is doing the same thing said. Money can earn later. This time with the baby can't be repeated.

I can be there most of the time for him. Never mind the life that I used to have. No more going out for shopping. For hanging out with friends. No more going concerts. Priorities changed. Things have changed now.

BUT online shopping still ada. Hahaha. And with a baby now, the baby is always an excuse to spend money. LOL
Posted by Joan at 10:21 PM No comments: