amazingly I am happy this Monday

apart from waking up from a nightmare and a disappointment of the finals of EURO 2008.

I am happy, hope the rest of the day will turn out well.

It took me quite some time to post this.

Been busy..very busy, especially with my most honourable guest.

Well, this is summarized version on what I intended to post a few week back

If you happen to plan to shop in kk, the last place that you must go in your list *i must advice you* is to be Asia City Shopping complex.

Apart from having a-so-called ice skating rink. Well, it is actually not ice pun, wax saja, there's nothing worth visiting that place.

Or if you prefer to be one of the snatch thieves victim like the case below, just be my guest.

This incident happen at first floor near the game arcade. The girl in the picture below was talking on the phone while her other sisters was not far from her.*because the arcade was noisy ba* 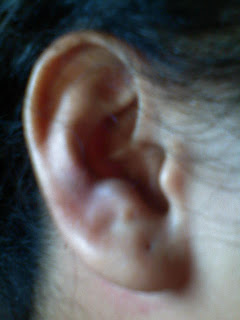 blue black ear and swollen right jaw
Then a few minutes later, 3 men were seen running from the place where this girl was talking and not long after that her sisters saw this girl staggering to her feet, dazed and injured. 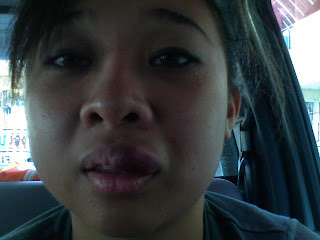 lips that almost burst, if the force could be harder or she resist the force, she might end up with flesh coming out from the lips and broken teeth
The 3 men, had punched her repeatedly with fist double her fist size. 3 men you know! She herself doesnt even know how many blows to her face was thrown by those evil men. All she knew was to cover her face while still holding the phone and her bag under her arm.

Punched until she fell to the floor, plastered at a corner where she can't get up.

and when the security guards were alarmed about this,by her sisters; their reaction was

The girl pictured above is my sister

I was there at Asia City for the rehearsal of an event, so my other sisters was with her near the arcade.

I only learned about the incident after 10 to 15 minutes it had happened because the security guard doesnt know what to do, sempat lagi mau bawa my sisters turun naik the building cos he not sure where to bring them

My sister punya face bengkak2 and lips almost burst keluar flesh the guards only asked her to sit down and calm down, * when my other younger sis asked for ice, they said nanti dulu..apa la*

The CCTV in the building is not enough and the security guard bergaya saja takut with all those culprits, and I learned that first floor, the level that my sister kena pukul got only ONE cctv , ONE you know..located at the lobby. what a shitty place is this?

So in the end, memang cannot tangkap la the 3 culprits.

BUt, we were still grateful that even though she was hit badly and her handphone kena ambil, the 3 men didn't attacked her with a knife or else, worse can happen la.

Bottom line is, don't go to Asia City, especially on the weekend. This is where all those "makhluk asing-evil ones" berkampung. According to the police *where we lodged our report*, the complex is most common for cases like this. My sister was not the first one.

If it was not for the event, me and my sisters will definitely not be there at all.

I heard the tragic news on the evening of 16 June. I almost pengsan hearing the news. Time just froze and I can't move.
" si Kojer accident, macam tiada harapan lagi.."

It was just that Sunday night, I spoke to her after the Miss Taekwondo. I said goodbye to everyone there before I left. I remember asking her when she is going back to Ranau to teach. She told me it is gonna be on Monday and will start teaching on Tuesday. I told her to be careful while going back, as usual la tu.

The Miss Taekwondo detailed preparations started two weeks prior to the last weekend. Me and the other contestants as well as the other organizers have been together almost every evening. We joked, had fun, serious times but it's definitely taking a lot of our energy and time. She even told me that she is quite worried because she has to take leave from school for one week. *that was last week*. As there are only two of us, who are teachers in the whole Miss Taekwondo event, so I understand well what are her worries. 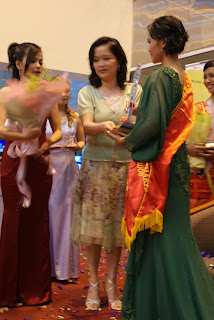 *this is the only picture I had taken of her during the Ms Tkdo and given this was my last time seeing her, I just felt so sad to reminded of this event.*
Little did I know, the last time I bid goodbye to her on late Sunday evening was my last goodbye to her...forever.

On the day, I received the news of her death, I just can't accept the fact that she is gone. All of us actually is trying to swallow the fact. But it is definitely not easy. Everything is just not easy. I wanted to go to her house after the news but it seems that everyone is heading to KB hospital that time for her body was there.

No one knew exactly what happened, because everytime I asked about what happened, it will surely gonna be a different version of story. But, according to the police she tried to overtake but didn't manage to get in her lane back and opted to just hit the guard rail but tidak sempat because her car rammed into the express bus. Eyewitness said that 70% of her kancil was under the bus. Police took some time to get there because of the location of the place and the firemen took quite some time to get her out. But given the situation, no one in the car could survive the impact. She was taken to KB hospital just for the declaration of death by doctor. 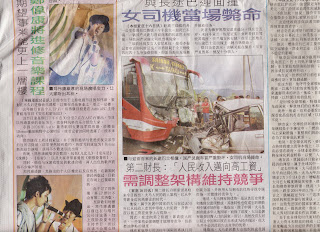 The injuries that she sustained is VERY bad. Some of my friends who went to the hospital saw but I prefer to remember her as a beautiful person. She was indeed a very beautiful person and I don't want the images post-accident erased that memories of her in my head.
The funeral was yesterday and everyone felt her loss. and it was just the first week of June she turned 25. I i am not mistaken her birthday was on the 6 or 8 of June.

(1983-2008)
Veronita a.k.a Kojer
You were one beautiful and strong woman
Intelligent and also always confident
A great friend, good sister and daughter to your family
Your achievements and quality made us so proud
Yet God loves you more.
It is hard to accept that but we know that you are now definitely safe with HIM

Rest in peace my friend, no amount of tears could explain our sadness

Email ThisBlogThis!Share to TwitterShare to FacebookShare to Pinterest
Labels: sad

wish me luck ya

so many unlucky experience prior to this event. to blog about this later

hopefully, lady luck will be on my side tonight. if possible, i want to reach for the skies...ahakz!

anyone, who is free please come to asia city tonight starting at 7pm ya.

anyway, it's kinda hard to blog..cos no time, no energy, my brain dead cos I was so damn busy with this pageant thingy.

ENTER button on my keyboard is half dead

Tomato Rice made me laugh...someone is mama's lil' boy still..OMG
Posted by Joan at 12:16 AM No comments:

crystal ball don't speak to me anymore...Juseleeno does

Prediction of the coming Disaster

Mr. Juseleeno, born in 1960(reportedly still alive in 2008), is a Brazilian who has made many predictions, and MOST have come to pass, including Princess Diana's death by car accident (which is instigated by someone near her and will probably unfortunately be written off as a car accident), 911 and the 2004 Indonesian tsunami. He sees the future in his dreams, and has an average of 3 to 9 such predictions per day. When he wakes up, he will write them down, and send warnings to those concerned.

If it concerns only a normal individual, he will write a letter to warn him/her.
If it is a famous person(celebrity, politician etc.), or matters concerning the public, he will not only send it to the individual himself/herself, but also related agencies, government, and media. He urged the media to publicise these predictions, but the reply always went along the lines of rejection for fear of arousing public panic.

2008, July: There will be an earthquake in Japan , which will cause a tsunami of 30 plus metres high to occur as well.

2008, 18th September: An earthquake with magnitude of approximately 9.1 will rock China , simultaneously causing a tsunami of more than 30 metres to occur, resulting in the deaths of more than 1 million people.

Although this huge earthquake will happen after the Olympics have ended, there will be a series of relatively smaller earthquakes occurring in China before the huge earthquake. The China government, which is more concerned with the success of the Olympics, will most likely neglect to employ appropriate cautionary measures, thus the high casualty rate. If the China government does not publicise the occurrence of these minor earthquakes and evacuate people, the number of deaths will be as predicted.

2010: The temperatures in some countries of Africa could be as high as 58 degrees Celsius, and there will be a serious shortage of water.

2011: The research on the treatment of some cancers will be completed, but a new life-threatening virus will appear. People who are infected will die after only approx. 4 hours of coming into contact with the virus.

2013, 1st - 25th November: Research on treatment of cancers, except for brain tumors, will be completed. An earthquake, caused by volcanic eruptions, will happen on Bahama Island of the Canary Islands . A gigantic tsunami of roughly 150 metres will result. America mainlands, Brazil etc.

will be affected, with the tsunami pushing into the land as far as 15 to 20 kilometres. Before the occurrence of this gigantic tsunami, the sea/ocean water levels will sink by about 6 metres, and large flocks of birds will start to migrate.

2014: A small planet that has been gradually closing in on Earth might eventually collide with Earth, and this collision, if come to pass, will affect the survival of humans as a whole.

2015: By the mid of November, the average temperature of Earth could be as high as 59 degrees Celsius. Many people will die from the overheat, and international confusion and terror ensues.

2026, July: A super earthquake will occur in Sans Francisco, and it will be named "The Big One". Huge damage to surrounding areas. Many volcanoes will re-activate, and the height of resulting tsunami will be more than 150 metres.

Mr. Juseleeno made known his predictions in hopes that people will take heed of his warnings, so that these disasters may be avoided. He hopes there will be a major change in the thinking of people's mindsets in the time period 2007 - 2008. One factor will be the environmental issue of global warming, which is more serious than what some meteorologists assume.

someone is cheating on you???? 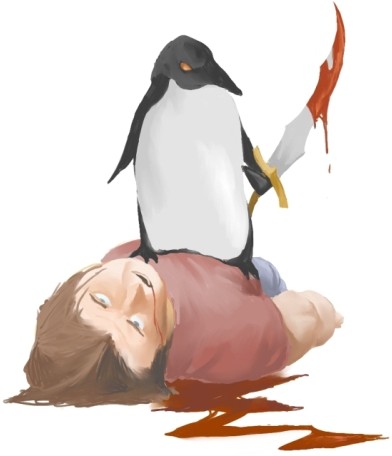 I will follow the what the penguin did
Posted by Joan at 9:12 PM 2 comments: