How tight is "TIGHT"?

TIGHT. means ketat. Tight fitting clothes? Tight situation? Tight? I guess everyone knows what tight means and I leave it to your own imagination on how you want to define and explain the term TIGHT.

Somehow, how do you want to gauge the tightness of something? ... Hmmm..

Tightness of ones clothes...Is there a certain unit or system that could be used to measure that?

Quoting from the STAR paper -

She said the ruling was a reflection of a narrow mindset and she was wondering if they would stop their nonsense only when the women became invisible.

Josiah said everyone had the freedom to wear clothes of their choice, and that no one should dictate what a person should wear, certainly not the MPKB.

“I would like to know what is the (acceptable) level of tightness of a pair of pants or jeans, and what happens to those of us who have larger buttocks? Is the MPKB saying that we cannot wear pants or jeans as it will emphasise the buttocks?'' she asked when contacted yesterday.

Tight jeans...Tight mini-skirt..tight shirt. Yet how do you determine that it is tight?

If anyone had read today's STAR. You could be laughing about the Kelantan government's decision to fine those who are not "decently clothed"...but how the decent is decent * again* 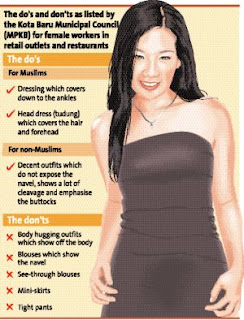 Now, I can imagine the whole Kelantan nobody wear tight fitting clothes. All wear baju kurung to be safe.

BUT...if anyone pernah wear the baju kurung they will surely noticed that this baju kurung will also hug your body sometimes. It is not that safe to hide your body under that attire.

When you are walking, the fabric of the baju kurung itself is quite soft therefore when there is movement it tend to cling on your body as well. Although it is not all the time body-hugging but still it is not the safest attire to be decent. *at least for me I think that way*.

If in the first place the Government of Kelantan wanted to impose this ruling to avoid all the molest and rape cases from happening. I think it just doesnt work that way.

You see... the baju kurung also has its own appeal to some men. I think most men and furthermore the majority of people in Kelantan is-you-know-who la. So, as I said the fabric is quite soft and tend to cling on your body though it wont be all the time la, this will create more anticipation and leave more space for the men to fantasize what is underneath.

I remember last time, one of my guy friend once said to me about his comments about a girl who wear baju kurung.

"That girl really have the body of a Malay girl behind the baju kurung".

See...people can be as pervert as they want to be without even taking in the factor of the clothes.

If everything is not safe then wear what? Wear apa pun if you are seen by a pervert, a pervert still a pervert.

If dressing decently will lower the sex crime then how that can explain the rise of child rape and molest cases?

Nothing is safe la. I think for the Kelantanese there, if takut kena fine then just wear huge box. For example the box that can store a refrigerator. Take that box. Cut the bottom part for your two legs. One hole at the top for the head and two holes on each side for the hands. This way, nothing can be an issue anymore.
Posted by Joan at 11:40 PM

The point is, this tightness thingy is very subjective. People's perceptive on how tight an apparel is that it goes beyond the law is as varied and as many as the number of people looking at it.

"Thightness is in the eyes of the beholder"

And one more thing is their justification for enforcing this law. They say, as Kota Bharu (I hope I get the name right) is recently elected as "Bandaraya Islam", they want the people to reflect the Islam-ness of the city. What's so Islamic in forcing people to choose either wearing the law-abiding clothing or getting fined? And they even include the non-muslims for heaven's sake.

Another argument put up was the complaints from some citizens saying some retail workers are wearing overly-sexy clothes (to which extent is not specified) to attract customers. Well, face it gentlemen, it's human nature, or should I say, men nature. It's capitalism nature. And if those people forget, we are living in a capitalistic country whether we like it or not. Tell your husbands to look elsewhere lah. And if they really an Islamic city, then they shouldn't have gone to the retail outlets in the first place.

This kind of stuff crop up from time to time. I mean crappy stuff.

hihi, funny thing to implement actually. how to follow? hard-eanrned money to be wated on fines? funny

so much for the 50 years of independence...check out wat the stupidity of the leaders are indulging into