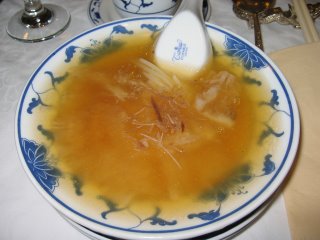 "In the last fifteen years demand for shark fin soup has boomed in Asia. Hong Kong, Singapore and Taiwan are the main shark fin trading centres. Asian consumers are unaware of the cruelty and unsustainability of the shark fin trade. Increasingly on the high seas sharks are “finned” and the rest of their bodies, often still alive, are dumped at sea. Shark meat is often too low-value compared to the target species (e.g. tuna) so 95-99% of the shark is discarded to conserve hold space. Shark fin provides gelatinous bulk in shark fin soup, but it has no taste – the soup has to be flavoured with chicken or other stock. While a fisherman in India will earn only $6 per pound of shark fin, a bowl of soup can cost $100 in a Hong Kong restaurant."

What?? "Finned" and the rest of the bodies* still alive dump at sea. Yikes! It is like someone, cut off your leg...cook it and make it into soup. AND you...being left there limping, bleeding until you turn white. LIFELESS 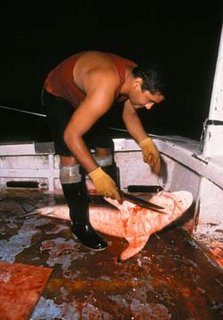 I don't know what Shark Fin Soup lovers will say about this, but this cruelty can be stopped by one small action.

Hmmm...Shark Fin soup is the delicacy especially for the chinese,and...will always be.This is the FACT!!
I'm a scuba diver and the finning scenes really make me SICK and people who eat the soup really don't command any respect from me even my parents!!
Eating a shark fin is like eating the finger nails or toe nails,0% nutritious value and worse,it contains high concentration of mercury!!I really agree with you and respect you who doesn't take that shark fin soup.