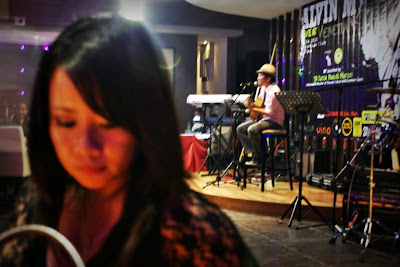 Officially launched by the guest of honor, Datuk Masidi Manjun. A lot of other local artists, friends and families of Alvin were there to support him too.

Since, it is the Easter weekend, everyone's schedule are busy, I thought I can't make it to the launching party. But I did and had a really great time. The showcase was awesome. The band who accompanied Alvin's performance was mad awesome too! Lovin' the latin sounds infused together with the R&B style.

Bah, go buy his CD la. It is very much worth to listen too. I personally think that the CD cover is absolutely creative and eye-catching.
My fave track on his EP is a song called titled "Sing a song". His other songs are nice too but I like this the most. I guess with proper promotion this one can go international. Wah, can ka say like that? Optimism. Yeay!!
Support our local artist.

Here's how Sing A Song sound like ( acoustic ). The studio version sounds way way better. So get your copy now and let me know what you think? hehehe..
Anyway, the teaser of the Dusun Song in the CD, it really works. Can't wait for the real song to come out.