After battling with his sickness for over a month. He finally breathe his last on the 27th of February. It's almost exactly 2 years he was with us.
He was diagnosed to have contracted the dog virus and being a mixed breed ( domestic dog + German Shepard ) and he wasn't vaccinated, there was nothing that we can do when we know about it. The vet said there's no cure for the sickness. His chance to live is 50-50. If he were to get better it all depends on him and we must give him encouragement.
It all started when he starts to have soreness in his joints. He tripped and fell quite often while running and playing with us. We never thought that it was one of the symptoms of his sickness. Until when he started to have fever and losing appetite. That was early January.
By the end of January, he refused to eat. He basically lived on water and occasional sweetened milk. By the last two weeks of his life, he just can't move anymore. He was just there lying down, pee there as well. We have to move him from time to time. Clean his nose and eyes. All those things that you have to do for a sick person.
My sister, Didi, who took care of him almost all the time, at times felt so beaten up to take care of him. At the brink of giving up, but at the sight of him, we just can't give up. The last few days of his life, he can't take in any liquid anymore because he can't put it in his tongue anymore.
This is one of the symptoms of his sickness. He will lose control of his movement because the virus is attacking his brain and nerves. Canine Distemper that's what the vet told us.
The painful part before his death is when he woke up that morning and we found out that he is blind already. So, sad. That's the first time that he didn't fell asleep for most of the hours during the day. ( because usually he will be asleep ). I guess he was so scared that he can't see anything. He only have to depend on his hearing.
He really suffered so much. He died a slow death. But, I do not know why we don't have the heart to put him down as well.
When he finally stopped breathing that late afternoon of 27th February. I was sad but relieved at the same time.
He was finally relieved from all the suffering and just went to a better place. Didi cried the hardest when he left and the rest of us did as well.
*** ah, type this post pun sa mau nangis juga ni..huhuhu***
This was when Tom-Tom was a few months old with his bestie Jem-Jem 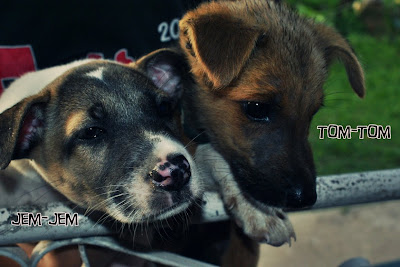 I'm sad too just by reading your post. Sorry for your loss.. :(

understand how it feels to lose a dear friend. I felt the same when my cat, Socky died last year...and lost Miko this year...uhuhuhuhuh....I am sure he is somewhere up there, no more pain.

may your soul rest in peace in dog heaven tom-tom.
im sorry for your loss joan.