Oh man, I love this country

I called it the land of political absurdity

Full of ludicrousness amid stupidity

First in the pipeline is Mr. Badawi

In that spirit he created a new Islam Hadhari

Some touted it as Islam Ada Hari 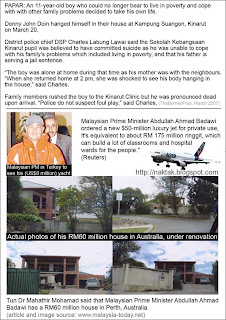 When the original Islam turned awry.

He loves to travel in style like big celebrity

Making grand entrance in any opportunity

So he insisted a private jet paid by Treasury

He said the government didn't purchase it out rightly

The government is leasing it from SPM, a GLC

For him, this is a good strategy

By doing that he thinks he can save money

Perth seems to be his favourite city

And then went on sailing trip with Todt of Ferrari

But yet, the jet setting PM was outside the country

Badawi has son-in-law by the name of Khairy

Recently both blessed with the baby

That has longest name in the country

I can only remember the last name, Khairy

Claimed to have "protection" from Mr. Badawi

Has a big wish to be PM by age of forty 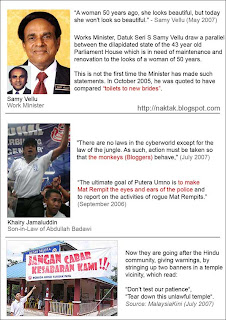 So he is gathering support from Putera and Puteri

Through ECM Libra and some crony

Media was at his helm through NST

Now he has potent tools – money, media and machinery

And his father-in-law alias Perdana Menteri

Meanwhile Hisham is putting up a new strategy

It backfires especially to Chinese community

His reasoning draws conclusion that he is puny

Najib is not convince Hisham to be his deputy

Provided that Rosmah is okay to work with Nazri

We don't have to elaborate the story

You have to come here to enjoy the absurdity

We have quite a few funny ministers and MP

Before Hindraf he represents Indian community

In press conference he got agitated quite easily

When Umno conference was held on Deepavali

He said no "open house" as sign of hostility

He twisted the decision maybe after talking to Indrani

The latest one was Cameron Highland MP Mr. Devamani

He has broken ranks with fellow BN MP

When he accused government not doing enough for Indian community

After meeting with BN Whip, he regretted and say sorry.

Let me continue my story

Well, you probably have heard it already

About the biggest anti-government rally

Not exactly same scale as 98 Reformasi

Short-notice on Election Day is customary

Just a day before Pak Lah was basking in glory

Full of hypocrisy and puji-memuji

Despite threats and warning from Pak Lah and Khairy

People are defiant and take no heed from Badawi

They chanted God is Great, Daulat Tuanku and Reformasi

November is a month of illegal assembly

The rally was given wide publicity

The rally was headlined in Al Jazeera and BBC

Such as Zam who head the Info Ministry

In an interview that becoming laughing stock in the country

Scrambling for words and chew out frantically

He can't censor it as we are in digital technology

Well that is one example of political absurdity

What do you expect from half past six menteri

Some are in complete ignorance and dreary

Some will resort to unthinkable publicity

Some will slaughter cows in parliament for kenduri

To celebrate the matrimony of our own Sleeping Beauty

Another stupid joke by backbencher MPs.

You can't find this in your country

So many things to write for your Daily

No wonder he keeps coming here for juicy story

Malay tabloids prefer to write about ghost and celebrity

Maybe they got sick of constant spat by political party

They prefer to idolise people like Siti or Mawi

Do you think they care who is their MP? 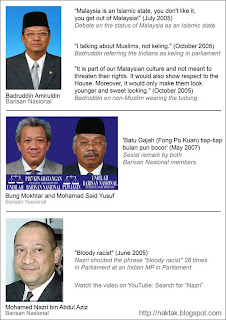 ooo..i work for the government as well okay..posted this just to share and let others judge for it. Those eligible to vote, take time to ponder..tidak lama lagi pilihanraya tu...ahaha. With the promise of development coming to Sabah under the Sabah Development Corridor (SDC). Everything is put to stake now, each side is trying to put their best foot forward to win the hearts of the people especially in Sabah.

GOOD or BAD, you decide :P