Did anyone of you went out to have some fun? yeah, I did. 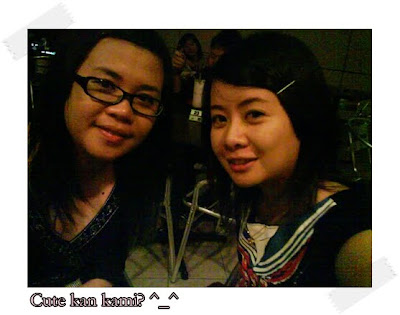 *we* actually. My cousin + me + colleagues
Halo Cafe was the destination.
Btw, City Mall on a Sat night = jam! Why you all wanna go there don't car pool one? aiya..
Anyway, it was My Story #3 night there. I missed the #2 edition because I was away. Rugi oh, then it's sort of a payback time this time around. ^_^
4 acts for tonight
1) Kevin Tan
He is the guy with flute. I never know that chinese flute can sound so nice like that. hehe. He, playing the instrument pretty much reminded me of the flute played in the bamboo orchestra. Oh ya, love the fusion of the chinese flute and modern music for the opening number. "I'm yours"- Cool!
2) Cherry L
At first when I saw her, I thought she is one of the waitress at the cafe. Jalan sana sini saja. Then I get to know that she is a part time singer at the cafe as well. No wonder la so biasa with the place. Hehe.
Anyway, love her sound. Sentimental and very straight to the heart kinda music. Just don't know how to describe that. Just that her Malay diction for the malay number is kinda disturbing. Haha..adui, jahat oh saya.
3) W.O.R.M
Such a catchy name, not to mention the band members appearance. Black eyeliners. The masked guy looking like a bandit. The hairstyle. Cool! I wonder who style them..
But, as "ganas" as they appear. They sound not very ganas also.( the act accompanying Joanna funk sounded more ganas than them. hehe) They are launching their first album soon. I guess their first number that they sang can sell la. Pardon me for not remembering the song title.
And the vocalist, he is g.o.o.d! hehe 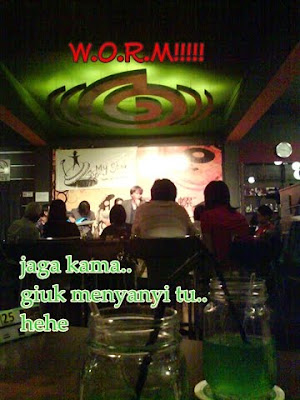 4) Joanna Funk & Friends
I have been longing and so curious to see how the melodica is being used as a major instrument in a performance. Well, I saw one tonight. Her first performance with the 4AG band was awesome! That vocalist for the group is crazy! 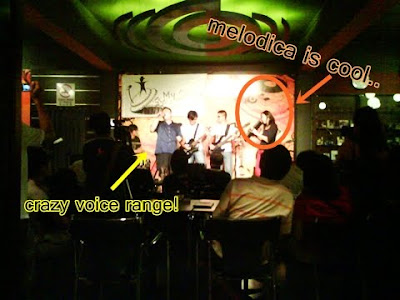 He can be the guy and the girl in the song. Don't believe me? Click the video !
The Sayang Kinabalu song performed after that was a bit not up to my liking though. Don't know why.
It was a fun night, glad I went to this one.
Totally missing out the fun on #2. Huhu. Anyway, I am so looking forward for the christmas edition of My Story on December. Jonathan Tse had done a good job on organizing this. Btw, my friend, Suzi, wants your phone number..haha (as if he gonna read this...LOL!)
Just one thing that spoiled a bit of the fun, the cafe just don't have enough food la. Now my perut masuk angin because didn't get to eat properly. I had to order snacks only. The big and colourful menu that the cafe have, don't really serve any function because they don't have almost all of the things on the menu.
Strange.
I ordered a rice dish at first, then got cancelled because "habis". Ordered something else, a club sandwich. Then cancelled also because "habis".
But, I saw across the table, a couple who made their order later than me got a club sandwich. Cilaka. 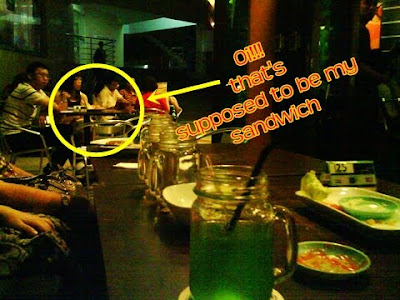 Rayner. Dun worry. I have updated the links on the blog-o-fame

alvin..you are refering to me ka itu starstruck thingy..cessss! haha

And he's here too. http://sabahsongs.wordpress.com

Joanna as in Joanna Funk? ooooh..*faint!*