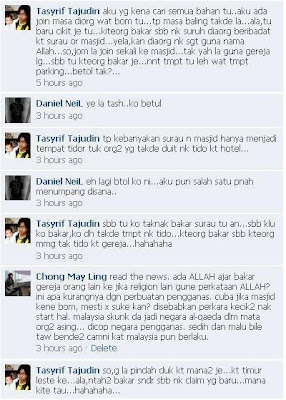 Don't spread rumors they say, truth is being exploited.
I am sure people of different religions won't be happy with this Tasyrif Tajudin fella. He is a hoax or a real person and the stories. God only knows.
People and their antics and own views, this is very normal but now the respect is gone.
Why? *sigh*
Just a thought, if something is burning. Put it out with water. Don't pour oil else it will burn other things nearby.
Everyone has a role to play. It is not easy but it is possible.
Quit talking about the same thing, same topic discussion, because explanations and debates won't take you anywhere.
Pray for peace, change your *not someone else's* thinking, and just spread the love.
Because at the end of the day, you are just another human being trying to live in this world and eventually you will die. So, live like you will die tomorrow.
Btw, being an extremist won't take you to heaven either...Hahaha.
Oh ya, one more thing...if you do have a religion, aren't you are supposed to be living as what the religion taught you to do so?
Love - that's all that matters.
Posted by Joan at 10:30 AM

i think we should all do one thing together. just ignore the God-damned matter! makin we discuss about it, makin la besar the hall. ntah pa lagi yg terbakar nanti.

"f someone takes your cloak, do not stop him from taking your tunic. Give to everyone who asks you, and if anyone takes what belongs to you, do not demand it back."

Agreed. But what this person has done, is either confessed arrogantly to his doings, and this means involve somehow in the burning of the churches, which we cannot ignore.

Joke or otherwise, this is serious.

That being said, I hope there no troublemaker fags in our side of the country lulz XD

If we want a new church, we believe God will provide. We don't have to burn the church to get a new one. Haha!

police is looking after this guy kan?